Iron Mike Tyson, The youngest ever to win world champion at the age of 19-20 year. reigned as the undisputed world heavyweight champion from 1987 to 1990.
Mike Tyson is 54 years old now and is out of prime. All Mike Tyson can do right now is fight for exhibition and cannot fight for world title because of his age.
Mike Tyson's last fight was an exhibition against a retired boxer champion Roy Jones Jr. Which ended as draw in the 8 round boxing and accepted by the two champions as draw. Though people claimed Mike Tyson won for landing more shots.

The Question is, Would you fight 54 years old Mike Tyson for $5million?

Would you reject the fight reason be that you could risk your life or would his age affect his performances and you can go the distance?

Drop your comments and let's see our possible abilities. 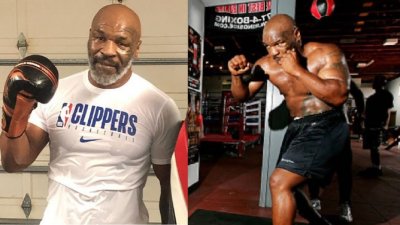 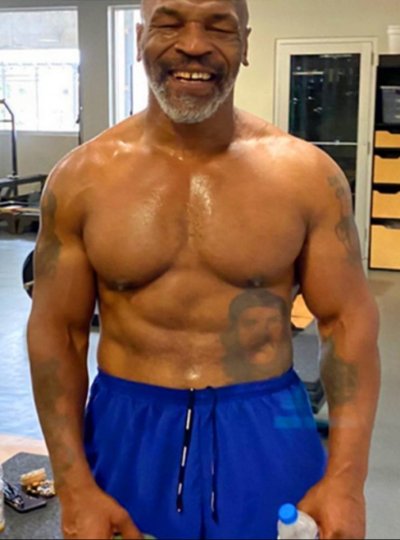 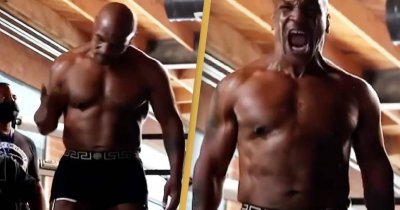 Hahahhahaha. This is rather intriguing.
On other circumstances that its happens am a guy and well I can throw some punches, of cause I will like to give it a try for quite a number of reasons. The first reason is that the money is rather so inviting and who will say no to that amount of money.

secondly, am going to take up the challenge to gain experience. He's a genius in this boxing stuff so am sure that the way he will performing his skills will be special and by so doing, I will pay attention to them and gain much more experience. I wouldn't be afraid of failing because I know he's a good one and I will really be a small challenge in his sight. I will just take a leap of faith like David and take up the challenge to fight him *winks*
**Wonders**

True! who actually would turn down that kind of money? well, some persons will turn it down because they wouldn't want to risk their lives over money and some persons have the money. But Even boxers take risk of death in fighting in the ring.

For me, i think i would take the money because first, Mike Tyson is getting old and will not be as furious and explosive as he was when he was early 20's. Secondly, I can run as much as i can in the ring till i notice he is getting a bit tired base on age difference. Three, Money is a motivation and a lot of persons can choose to die in the ring trying to get the millions than not to try at all.

5, Million Dollars is above 2 Billion Naira. why wount i risk it and get the reward. After all, i can also train myself at least to last all the rounds in the ring.
****

@ogiejoe:
o🙏🙏: that's the spirit bro and for someone like me that is ready to take risks, that opportunity is a very profitable risk and am surely going to take it.
**Wonders**

Hmmmnnn I would love to fight Mike Tyson for 5 million dollars against all odds.
I might eventually win the fight tho because he's got the experience but I've got the strength.
He doesn't have what I have which is strength and I don't have what he has which is experience.
I just need severe training and a little bit of matches with other opponents inorder to face him.
If fighting Mike Tyson is all it takes to get 5 million dollars, then I'm ready to keep fighting Mike Tyson for the rest of my life.

Sorry, did you just say you may beat Mike Tyson? That you have the strength and He has the experience. Well, do you mean you have the stamina and he has got the experience? because for strength i don't think you would still stand a chance in any time. The only place you may win is stamina that if both of you run, you may win which is still hard to tell because we have not seen you run like for 3hours. but i know Mike Tyson even right now can run for 3hours. yes we will all want to fight him because of the money. Not that we Expect to win but just fight to live
****

Fighting Mike Tyson for 5 million dollars is even too much self.
I would fight Mike Tyson for just 500,000 dollars.
Do u know that money is capable of changing my life for the better?
Well as for me I don't see it as a big deal ooo....
I don't mind getting all the pinches from Mike Tyson himself.
I don't mind being knocked out several times by Mike Tyson, but I would never back out of that fight for any reason.
**Just me**

Let me start by saying with the level of the economy today and what is going on all around and I see the opportunity to fight Mike Tyson for 5 million dollars and you are asking me particularly that would I fight my cousin why won't I just find my cousin right now if you can bring him out for me even if I'm asleep I will wake up and fight him for 5 million dollars.

Like do you know the conversion of 5 million dollars to naira what that means with the way now that naira has been devalued I'm going to be thriving really high and I'm going to be among the richest persons if not in my area.

I know it may be hard for me as I'm going to get some punches, heavy punches from him as I know that Mike Tyson is a very tough fighter and had also he has beaten world champions during his youthful time with knockout and all that all I will do is to fight and move around the range on front and back, throw some punches in the air and act like I'm going to hit him then after all these what I will just do is to allow some of his punches to touch me then after getting all these few punches I will fall and that's when the money is mine or what do you think as long as I do not kill myself I did not die during the fight so this is the fastest way of making money as it is.

Though I know it just a joke just to be at someone and get your brother I'm going to give the fight and go for it.
**Help the needy and love everyone**

Why are you typing a word each in multiple ways?

Yo bro you're so funny. Mike Tyson is a legend. Even with his old age he can still be on par with young growing boxers. In my own opinion, I would rather sit where I am done to go and waste my life fighting with Mike Tyson even though he's already an old man. 😅
****