I grew up having a great deal of respect for soldiers because I saw them as some form of national or personal protection as their job demands.

I held them in high esteem because their career or profession attracted both fear and respect.

Although,at some point , I began to detest that career because of the bad eggs within which has led to tarnishing their image and making Nigerians disregard them.

I also had some close relatives and family friends who were in the Nigerian Army but they were very kindhearted as opposed to what people think they are.

Over the years the Nigerian Army has experienced the good, bad and ugly sides of life in the country.


With the twists and turns they face, a lot of people seem to dread the profession while some others are not bothered about the sour experiences our soldiers are passing through, hence they keep enrolling.


Those who feel the profession has been bastardized discourage others from enrolling while those who are not moved by the unpleasant situations going on in the Nigerian Army are willing to join against all odds.


Some are scared that their loved ones are going to die like chickens in the hands of terrorists which shouldn't be so even if one is a soldier and they believe that dying for the country is not worth it as the families of the slain heroes are not even taken care of.

Only the lion hearted ,think otherwise as they believe that their presence can make a difference there or they may have other reasons for joining.

It's a case of different strokes for different folks.


What would be your response if a loved one tells you that he/ she wants to join the Nigerian Army? 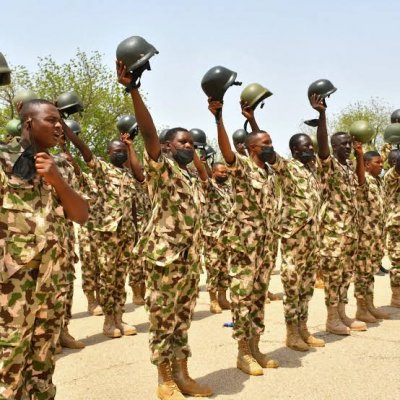 Nigeria's Army is a good place to be because they are the people God is using in saving our dear country from a lot of atrocities. Talking from my point of view I don't like my loved ones to join the Nigerian army; I don't think I can marry any man involved in the force.

Don't forget that the above illustration is my ideology but the amazing is that God can ordain a forced man for you and you will enjoy that passeth all understanding. Whenever our loved one wants to go into the Nigerian army we shouldn't force them but prayerfully encourage them.

Always have the mind of everything that will work together for your good and pursue such work for the people of your heart. The military is good and we should learn to encourage people to do it the government should keep compensating them for their job well done.

Actually i would not do that because the country we are in is not worth dieing for. Even in the military there is politics.
**Prince Benjamin**