Rivers state Governor, Nyesom Wike, over the weekend, welcomed hundreds of defectors from the All Progressives Congress (APC) and other parties to the People's Democratic Party (PDP).

Important personalities of both parties were in attendance.
Gov. Nyesom Wike stressed that his primary role in the party was to ensure that all candidates in Rivers state are elected next year because the state was paramount to him before any other person.

He commended the defectors for coming at the right time noting that the 2023 elections wasn't meant for those who wouldn't come back to mobilize their people but were only interested in being politicians from afar.

He further emphasised that politicians are made at home and he had changed the strategy of the election by going for those who matter in their various units. 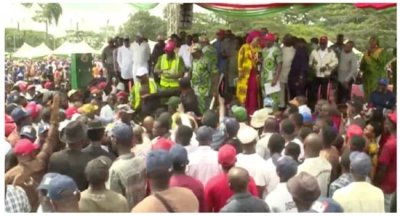