In many parts of the world, especially African countries, there is the tendency to experience vote buying during elections.

I have heard different views about this and many reactions from those who have been cajoled into taking bribes during elections.


Some rejected the offer because they felt it was tantamount to betraying their conscience or choice candidate.


Others simply had it planned out, by receiving the bribes, whether in cash or kind, and they still voted for their choice candidate.


They decided on doing so because the campaigners wouldn't go with them to the polling booths or wouldn't practically cast the votes into the ballot boxes for them.

For these set of people, it's a win win situation.


As for me, If I am bribed in any way during the elections, I'd simply receive it and still voted my choice, after all , no one forced them to give me and I didn't beg for it, also no one will make me vote for a different candidate at gun point.

In all ,I satisfied them by receiving the bribes but I still satisfied my self more by voting my choice.

It doesn't mean that does who rejected the offer are foolish, it's just that wisdom is profitable to direct.

What would you do if you experienced such? 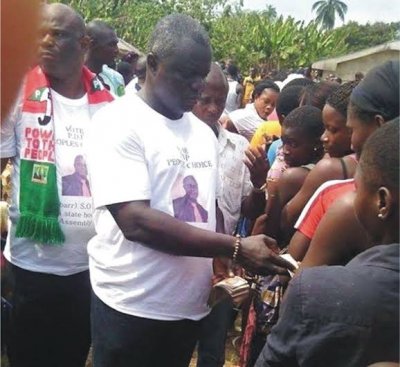 First and foremost, i would like to say that bribery of any sort is a serious sin before God. Therefore, for one who is a Christian, such act should not be done.

Personally, i will not accept such bribe, this is mostly because of my Faith in God. Furthermore, bribery, simply means selling your right or privilege for something else (usually money). In such act, you are selling your right as a citizen of this country, therefore, whatever kind of government the election produces, should not be your concern, but you have sold your rights to protect or question the same government you sold your right to.

So my advice to everyone is to avoid bribery, and vote the candidate you know is credible enough to lead Nigeria to a better state of being😁
****