This topic is drawing my mind to the cartoon anime, Avatar, where the boy had the power to manipulate 3 elements, earth, fire and water. I didn't watch it much though.

Both had good points to back up their claims and at the end I was left in the middle,not knowing which side to be on.

I'll try and lay out some points on the given topic, which asks this question, which is stronger, water or fire.

1. Water has been on the earth way before fire. Even in the Bible, in the story of creation, it tells us that water was part of the elements present as at then. So water should be stronger.

2. Water spreads faster than fire. Yes. Water has the ability to flow from one region to another and therefore it moves along any part, as long as it is not contained. It also takes the shape of the container which it is put.

3. There's more water in the earth. I'm not really sure of the percentage now but, about up to half percent of the earth's mass is occupied by water. Though this waters are always together at a particular place per time. We see this in oceans, rivers and streams, lakes, etc

4. Water can change form. Basic science teaches that water can exist in three different forms, solid, liquid and gas state. This shows how flexible water is. Even in these different states, they are all strong in their own ways.

5. Water is not create, but comes naturally. I know that chemically in chemistry, we are taught that two molecules of hydrogen, plus one molecule of oxygen, yields one molecule of water.
But that is when it would be used experimentally. However, water comes naturally from the bottom of the earth, when it s dug, from the clouds as rainfall. So it doesn't have to be created by any special reaction, there's always water.

6. Lastly, I think water has a lot more function in the earth than fire.
Firstly, we all have water content in our body, water is needed and used for our survival and existence. For food, bath, washing and so many other things.

A singer, Late Fela, sang a song and said, "Water no get enemy".

Water is referred to as a universal solvent. 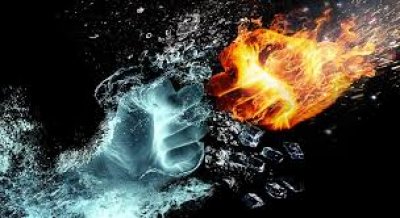 Water and fire , as the way I look at it water is more powerful than fire .

When fire is in action the only source that can kill fire is water.

Water is a natural phenomenon created from God.

Also fire is powerful is can distroy many thing and damage them .
Both has a certain effect on human .
**Oladipupo **

From my own point of view, i feel water is much more stronger than fire. Based on the fact that it is natural occuring while fire is created.