Skeletal remains of a man had been discovered after almost four years since he was last seen. The man has been later identified as John Aderemi Abiola, a landlord in Adeosun community in Ido Local Government Area of Oyo state. It is believed that the man was last seen since December 2018. He was a new landlord that just moved to his house a year ago before the incident happened.
Back in 2018, he told few persons that he will be travelling to Rivers state and would be back before the lleya festivities in 2018, however, when they did not see him as he said, they thought he chose to stay at Rivers because he rarely relate with his neighbours.

Time went by, the weeds in the deceased compound grew beyond the fence and enter into the next compound. Due to the multiple appearances of snakes and other reptiles in that area, the residents decided to log a complaint on the situation and they gain access to the deceased compound to clear the bush. On Sunday 4th of September, the community hired labourers to clear the bush while in the processed the noticed the deceased Mr. Abiola's car
a Volkswagen Golf car covered by bushes. They then later saw the window of the building is opened, due to their inquisitiveness, they rushed to the window and saw the man's body skeletonize on his bed.
The police and Nigeria security operatives were informed and they went to scene to investigate the incident. 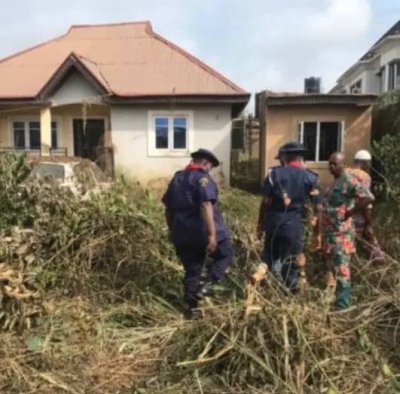 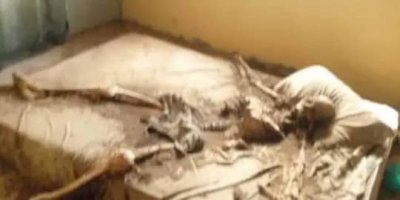 Hmmm!
This is strange but true. No one seem to have contacted members of his family.

Only God knows what must have transpired in his last moments.

Could it be he was a reincarnated being living amongst real beings.

So many questions that need answers.
**I love being me.**

After four years the body has now been found , so no one can actually say what killed the man .
Lord may your protection never live us.
Amen.

Hmmmmnnn.. it is well ooo... Alot of strange things are actually happening that we're not aware of...
**liltech**

I had to go through the comments on ground to ve sure that i wasnt the only one thinking this way.

The kind of stories we hear in our country is strange.

This kind of thing is coming after four whole years of death.. its well with us all
**Don't be a good student and a bad teacher.**

Hmmm, this is strange. The only thing I could draw from this is that the man was a loner. I mean it is not possible that ?#! will have family and friends and they will not have been trying to reach the man for four years.

I'm sure that if he has family and friends, they'll have been trying to reach him through his cell phone if he has any which I believe he has. And if they couldn't reach him, they will have come to his house to look for him and find out what was going on.

I recall the poster said the man hardly relates with his neighbors and this just concludes the information I'm trying to pass across in this post.

May his soul rest in peace. However, I'd like to add that no one should decide to be an island. Yes, the world is wicked and so is even 80% or 90% of humans are wicked.

However, God is fair and he will always give a good friend/family to anyone who desires and asks of him. This is just my opinion, I stand to be corrected!
**Wonders**

Nigeria is turning into something else with the kind of story we hear these days. So in all those years nobody could find him and not even a scent was persived in that negbourhood. I think the people in that area should be called for questioning regarding this matter.🤔
**Prince Benjamin**