A 200 Level student of the Nnamdi Azikiwe University,Awka, Anambra State,simply identified as Daniel, was shot dead while trying to recover his phone from armed robbers in his lodge.

The student who was from the Department of Philosophy in the institution was said to have dragged his phone with the robbers who came to raid his lodge.

An eyewitness said Daniel obediently gave his phone to the robbers but requested for his SIM card which they agreed to give him.


One of the assailants, already holding a corked gun, while struggling from a tight pack to give Daniel his SIM, mistakenly pulled the trigger . In the process , Daniel was shot in his stomach.


According to the source, Daniel was immediately rushed to the hospital, where he gave up the ghost due to excess loss of blood .


The Anambra State Police through its spokesman,DSP Tochukwu Ikenga, said the police had intensified patrol and surveillance around the area. 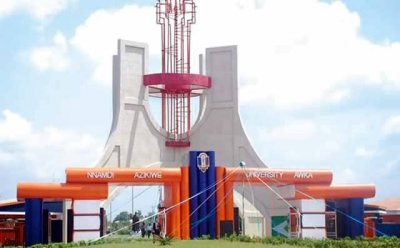 Oh sorry. May his soul rest in peace.
I send my condolences to his parents, family and relatives.

Though he also made a mistake of requesting for his sim card. If he is still alive he will buy another sim and either he do welcome back for the sim or he use the new one like that. When there is live that is hope that is why they said hope for the living.
I really pity the boy and his family.
REST IN PEACE