All Progressive Congress APC publicity secretary in Rivers state, Mr. Darlington Nwauju slams Wike on his comments on the former minister of transportation, Rotimi Amaechi and portray Wike's comments on him as humorous comments.
Mr. Darlington Nwauju went on to accuse Wike of spreading falsehood against the former minister. He said that the party will entertain the likes of Wike to degrade Amaechi's personality.

Still on the critics of the governor Wike, the APC publicity secretary went debunks Wike's statement attesting that the administration of Amaechi is not a debatable issue, and that records are set aside in the public domain that testify to Amaechi's excellent Achievements while he was still a Minister of Transportation.
Nwauju went on to present a PowerPoint presentation that contains Amaechi's 18 projects and human development programs in the state to resent the words Wike spoke against him.
He went on to highlight Amaechi's achievements mentioning the expansion of the Afarm Power Plant in Oyigbo LGA of Rivers state, the ongoing construction of the N120 billion Bod👎Bonny Road in the state and also the new terminal at the Port Harcourt International Airport and so on.

Nwanju also resent the Governor's claims that Amaechi can't access the Presidential Villa since both Amaechi and the President Buhari had a good relationship and he won't steep his self so low to prove to Wike that he can still access the villa. 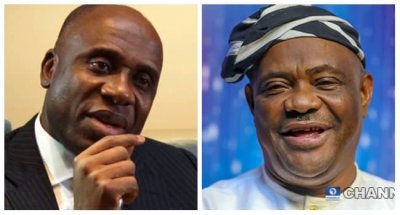 Lol, finnaly the APC have spoken against Wike:)
**Prince Benjamin**