Just as President Muhammadu Buhari's Government was reportedly plotting to bar aviation workers in the country from embarking on a strike, the aviation workers have taken the bull by the horn and protested against the government's move.

According to the newly amended Federal Airports Authority of Nigeria Act ,aviation workers cannot declare a strike action regardless of the situation.

This Act does not seem to go down well with other transport associations.
The protest has thus, left many passengers stranded on Monday as they sought for information and directives among themselves.

Aviation workers at Abuja took to the streets with banners and placards showing displeasure over the Bills/Acts of the aviation agencies and demanding for their voices to be heard.

It sure looks like strikes and protests are the only ways the government can feel the pulse of the labour force in Nigeria. 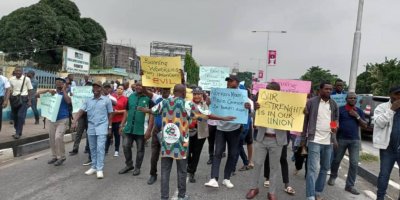 Is Nigeria really operating in the system of democracy or what exactly? Why do our leaders believe that they have the right to do what ever they like!🤔
**Prince Benjamin**