Some days ago the President of Nigeria Mohammedu Buhari twitted on twitter ( Attached bellow) on the memory of the civil war which ended about 3 Million Igbos in a bid to warn the Biafrans.
That twit have angered a lot of Nigerians apart from the Northerners who solidly supports Buhari on almost every front which has also caused a division in the country having two set the North (Nigeria) and every other part agitating for their own freedom.
That twit was removed by Twitter as they dim it inappropriate and the government of Nigeria furiously banned Twitter in the country which has become a global topic presently. 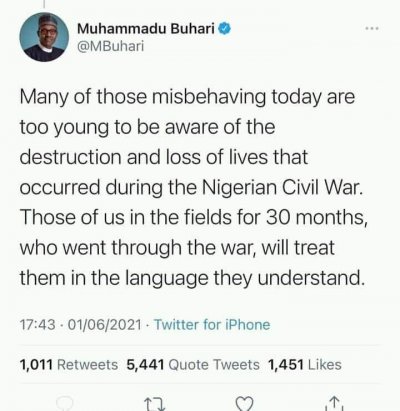 It is so surprising to see president buhari up this way again this is Nigeria where anything goes we call it democracy rather it's turning to autocracy and dictatorship government ruled by tyrants.

This is 21st century and we say we have freedom of speech and fundamental human rights, if the president of Nigeria has issue with Twitter then it will resolve it themselves so why affect all the citizens.

Even the association of Lawyers in Nigeria are totally against this, it is encroaching on our fundamental right as they just jeopardised the various opportunities people have when it comes to businesses and others.

It appears that they don't know that there are lots of consequences and disadvantages to what is done, lots of people out there on Twitter carry out their business on Twitter and all that but this now has caused a lot of calamity to the businesses of thousands of people if not millions in Nigeria.

Though I agree that they'll be lots of mixed feelings and reaction on this but the truth be told this is not right that should be going out and means of resolving this.

I feel they've been looking for the opportunity to get this done even right from the time of #Endsars and this is an avenue to take action and to do this to their own advantage nevertheless anyone that is doing able to continue a days at the end will come.
**Help the needy and love everyone**

@Fashnet: You are very right about the fact that Nigeria runs an autocratic system of leadership and not a democratic system of leadership.
I still have this feeling that we are still in the military era.
How will you ban Twitter from functioning in Nigeria?
Or is Buhari trying to take us back to 1978 when he was the president of Nigeria?
Well I don't blame him, I keep telling people that we are the problem of ourselves.
How would you vote an educated man and allow an illiterate to rule you as a country?

@lilcent: My brother it's just a pity that even the youth are still found to be in support of this so called government even as it is today.

The whole system needs cleansing and need for rebirth of a new country or else we might continue like this of APC and PDP keeps leading us on.
**Help the needy and love everyone**

Social media is not what mr president should face now there are lot of things on ground which are supposed to be amend instead of twitter.
What happened is that Mr president twitte was been deleted which is based on what he has posted , come to look at it Nigeria claim to be a Democratic country but is not.

Nigeria is in a state of emergency Mr president is talking about twitter does that really make sence people are suffering every day ,the country is full of evil did ,you hear bad news everyday ,I think it high time for Nigerian to weak up .
Mr president either twitter delete your post or not am less concerned but there are lot of things to do instead of twitter.

The situation of the country is getting worst Nigeria youth are angry ,things are not going on well if federal government ban Twitter then we move to another platform.

We don't have leaders in this country that is our major problem there are thousands of graduate out there which are unable to get job,crises all over the state in Nigeria there is no peace in the country.
Buhari should look for a way forward to Nigeria problem rather than twitter or social media platform issues.
Thanks.
**Abbey **

It is rather pathetic how a government who starves its people and leaves her youths unemployed are not worried about the state and well being of its people rather are grossly concerned with the fact that people say the truth. I mean its a democratic government and people are allowed to say what they want. Twitter ban has a large economic effect on the nation but they don't care as far as they no longer see "hate speech" this administration were part of the biggest critics during the former administration but now when people do the same thing they did to the GEJ administration its considered "hate speech" we should honestly define our priorities as a nation else we are up for greater damage.

I'm not surprised in the least that this is happening.
What do you expect when people put a sick head in power to govern healthy minds?

He knows who he is representing and their agenda as well. I feel sorry for those who clamoured for him to be in power today. I hope they're enjoying the change!

It is obvious that he's hell bent on taki ng this nation many steps backward. As it is now, Nigeria has turned upside down but as they say : It's not yet Uhuru.

We watch and hope that the real change will come suddenly as it pleases God.
**I love being me.**

The government is trying to shut us up.
They don't want us to air our voice in any way which is very bad.
This is a deferment of the right of citizens which is against the law.
I won't be surprised if the government decides to ban Facebook and Instagram as well because our president is a very backward and a brain retarded personality.
I just hope things get better in this country.
**LAGOS**

The government is trying to shut us up.
They don't want us to air our voice in any way which is very bad.

This is a deferment of the right of citizens which is against the law.
I won't be surprised if the government decides to ban Facebook and Instagram as well because our president is a very backward and a brain retarded personality.
I just hope things get better in this country.
**LAGOS**

@Richie: That's the fear and question in the air. I just hope that slavery will not be awaken again as this now looks like blacks enslaving blacks in a disguised manner.
**Help the needy and love everyone**

Well I'm not surprised at all because we are the cause of what is going on right now..
We voted the government in with our own hands.
What do we expect from a president that did not finish his primary education
You are a product of your mental capacity. You can't give what you don't have.
He bans cryptocurrency from Nigeria, he wants to legalise a database for cows, where humans don't even have a database.
Now he has banned Twitter.... What else do u expect from an illiterate?
Well the next election is coming, if you like Keep selling your vote.
That is what you stand to get when you stop doing the right thing.
**liltech**