Residents of some areas in Lagos State on Monday lamented over the devastating effects of floods caused by the heavy downpour which began on Sunday night.

The floods caused many motorists and road users to wade through gridlocks to get to their destinations and business areas.

Some of the affected areas include Marina road on Lagos Island, Aboru -Iyana-Ipaja area and some streets in Dolphin Estate ,Ikoyi.

A building collapse in Mende, Maryland area almost claimed the lives of nine ladies who were trapped, but were eventually rescued as National Emergency Management Agency (NEMA) responded swiftly.

Unfortunately, two persons in Ipaja area of the state were swept away by the floods.
The family of the deceased have been evacuated to a relative residence.
Special adviser to the Governor on, Drainage and Water Resources , Joe Igbokwe , said that efforts were underway to ensure better protection for the city as Lagos is a coastal city where flash floods are expected and they disappear within the twinkle of an eye. He also added that floods are a global phenomenon which can be managed.

Many have reacted to the situation calling for drainages to be put in place before buildings are erected. 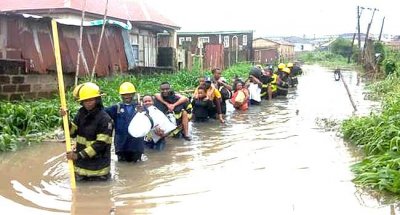 May God grant the family of the deceased, the strength to bear the lost
**Samuel Kingsley**