What comes to your mind whenever you see the large crowds that gather during Political rallies or campaigns?

I have always thought about this each time people gather for rallies.

The General Overseer of the Redeemed Christian Church of God ( RCCG) ,has alleged that the majority of the crowd in campaign rallies are rented by political parties.


He noted that the reason two different parties do not hold their campaign simultaneously in a town is because majority of the crowd are rented.


According to him, he wonders what will happen when the campaigns are over since the youths or people were paid to attend the rallies.


As for me, large crowds in political campaigns doesn't determine who is loyal to what party.

This is why we should not score a parties ability or chances of winning just by the mammoth crowd that was gathered during rallies.


That is also the same when people are bribed to vote against their conscience.

Just because you bribed someone to vote for a candidate of your choice, it doesn't mean the person will likely play along .


It is possible for one to receive bribe and still not vote for who you want him to vote for.


In your opinion, do you think that large crowds show party allegiance or loyalty? 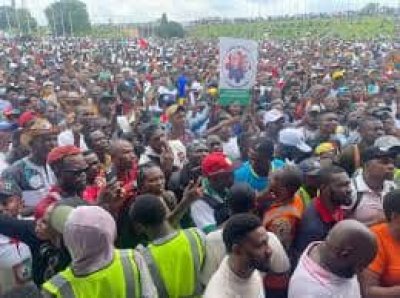 Oh No! Large crowds don't guarantee loyalty to political parties because Nigerians have this mentality of I won't vote but I will collect their money. Many people are attending campaigns because there is nothing to eat at home and the campaign venue serves as a way of getting money

In this era, every Nigerian is now wise and I am very sure no Nigerians will want to sell their votes this time around. I like the part where you said many of the political parties rent crowds just to impress the other parties that they have supporters but I think that's unnecessary.

A large supporter doesn't mean they will all vote for the person. Everybody is running after their own pockets and means of survival, neglecting that a day's food can't serve many years of poverty. So, therefore, think wisely and vote wisely in this new season.

Having a larger numbers of people during campaign doesn't mean the party will win the election. Not all the people that go out for campaign will for for the party.

Most people go out for the campaign because that know that at the end of the campaign something must come out for sure either cash or kind. So don't trust crowds with volting. Campaign and volting they are two different thing .

I may campaign for you and still not volt for you . In short is a dirty game and black market that you will just know the starting point but you will never know or guess the ending or who will win.
**HIGH-DEE**