Here's a heart touching message from the General Supretendient of Deeper Life Bible Church,Pastor Dr. W.F Kumuyi.
In his message he said...

What you have, hold fast that no man take thy crown, I pray nobody will take your crown.
Many years ago, persecution against the church

In this particular are I'm talking about now. was very intense. very difficult and very high.
And there were these people that were christians , and they decided that they were going to kill them. But not by shooting them. They were going to kill them by making them die slowly. And you see that kind of death, is very very painful. If somebody is shot, within a few minutes, the fellow is gone. But this one came with toture because of ita being gradual. They put terrible block, and this kind of block maybe you've not seen that kind over here.

They are,you know there was a particular place I was ministering and because the hall,they used that hall for what they call skating and they put solid ice on the ground,and the ice will look like just the ground where you are now, very very solid.

But because of the meetings we were having they had to put planks of wood on the solid ice,so that people can still sit down and put their legs on the solid plank. But then,there was sombody that tripped on that ice on the ground, that is the part that was not covered,and he broke his knee,I mean its solid solid ice.

But very very cold. So,this persecution of these 40 people .They put them in this particular ice,not covered,very cold. And as they just put them there,what will happen is that, they will just die away just like that,and they put soldiers so that they would not run away, soldiers on guard, with their guns.so that,those people will just stay there until they freeze to death, frozen to death.

So, this other fellow began to wonder, that before life is frozen out of me, maybe I should change my decision.

And eventually, one of these soldiers there, he has been looking at what was going on.

He was seeing this. He said what? glorious death
So, this last one when he was alone, and the cold was much, and the hunger was much, and the loneliness was much. Everything was so terrible, and all these other 39 people they have died. He was looking at their body like this, not knowing where they had gone.

He told those soldiers, He said, "I give up".I can't continue again, I can't endure again. That soldier that God opened his eyes now said, you don't want to continue? come out of the ice let me take your place. And he took his place and got his crown.

Hold fast what you have that no man will take your crown.
We don't know when Jesus is coming, maybe we've gone. You see, sometimes you're travelling an hundred miles and you have travelled ninety-nine miles. It remains only one mile.

Why don't you say, even if I die, only one mile. I will make it. Why will you allow the devil to take your crown?

You can watch the programme LIVE via the following links:

DCLM Radio : https://radio.dclm.org or Download the DCLM Radio App from the Play Store.

You can also register as a participant at https://events.dclm.org/#registration-form 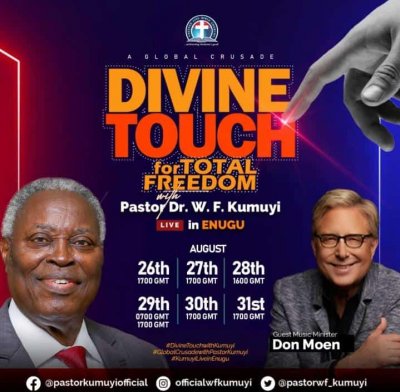 @Jerrythegifted: This is wonderful. I have decided to remain till I get my crown no matter what i'm passing through here.

My advice to Christian brothers and sisters especially in this our country that we should be patient enough. For God is not a man He knows what he is doing. And not far from now soon He will answer us.

In a country where following Christmas is an abomination we need patient to rule at the end that's why we need to amend our ways. We can't suffer here ans suffer over there.

Check what the discipline who spread the gospel died. All of them died as chicken except for john. Truly the persecution is there. If you are not experiencing it will come soon. But keep your gaze on God and leave the rest for Him.

We will not give up.
**Obakaemmanuel**