According to an eye witness, who was coming back from Lagos to Rivers state on the 14th Dec 2018. A police officer stopped one of Agofere company bus at Rumoji, before Choba police check point. He asked the driver to give him his driver license, and the driver provided it, he then ask for tinted glass permit, so the driver told the officer that he's not with it, because the company did not give him that. The police officer told the driver, if he did not provide the permit he's going to rough handle him. While arguing on that, all the passengers dropped down from the vehicle and started pleading with the police officer. A boy went and started talking to another police officer who joined with Mr.John the first police officer who asked for the permit. He was pleading with the officer to let them go. On the process of pleading the officer shot the boy on the leg. Am posting this for the world to see how unsave the country is becoming, even in the hands our so called security officers (police).

Nigerian police is a scam!

Those guys are mischievous and so corrupt. While traveling, people have to be careful because police men will stop the bus, in the process of checking the passengers they will slip drugs or anything in ur bag or pocket to incriminate you. Then ask you to settle them or they will take to the station.
Those guys are dangerous as well, they can kill to acquire people's property.
They themselves don't know the law. I think the police recruitment process and standards should be raised.
**Happiness is free. **

This is Nigeria for you, Nnamdi Kanu called this country Zoo. i totally agree with him, i just heard about this news and and i just shook my head, like how and why should people who are suppose to be protecting us and guarding us be doing this? and i heard it was because of just 50 naira that the police man was angry about that the driver refused to drop the 50 naira. and the passenger decided to plead for the driver so that they can go to where they are going, and i the police man out of annoyance shot the young boy. all these are because the country has been led by evil leaders who care not about its people. these people should just all die and let fresh people with fresh mind come to leadership and save this country from its mess. the police are not there to do their job anymore, they just want to fill their pockets
**Bayo**


@gentleman1: I totally agree with you. You said it, that their little token is the sole reason that police officer did that not even because of the tinted glass permit.
**Aprare**

Seriously, this stopping of vehicles on the way is getting too much in this country. There was a time i was also coming back from Lagos, getting to Delta State a village before patani, this officers stopped our vehicle and asked for everything they wanted to see, and been provided by the driver they still ask we the passengers to come down to check our loads, so we did. After all that, they still delayed us up to an hour, and it was getting late then before they lett us go. All because of their self interest. And besides, it's not in their duty to be doing the checking job, it's supposed to be the work of Road Safety Officers but am surprised why they have taken this upon themselves as police officers.
****

Seriously, this stopping of vehicles on the way is getting too much in this country. There was a time i was also coming back from Lagos, getting to Delta State a village before patani, this officers stopped our vehicle and asked for everything they wanted to see, and been provided by the driver they still ask we the passengers to come down to check our loads, so we did. After all that, they still delayed us up to an hour, and it was getting late then before they lett us go. All because of their self interest. And besides, it's not in their duty to be doing the checking job, it's supposed to be the work of Road Safety Officers but am surprised why they have taken this upon themselves as police officers. Nigerian leaders are too corrupt to make things right. All they know is corruption to steal money for their pockets nothing else.
**bell**

This is a photograph of the incident...
**bell** 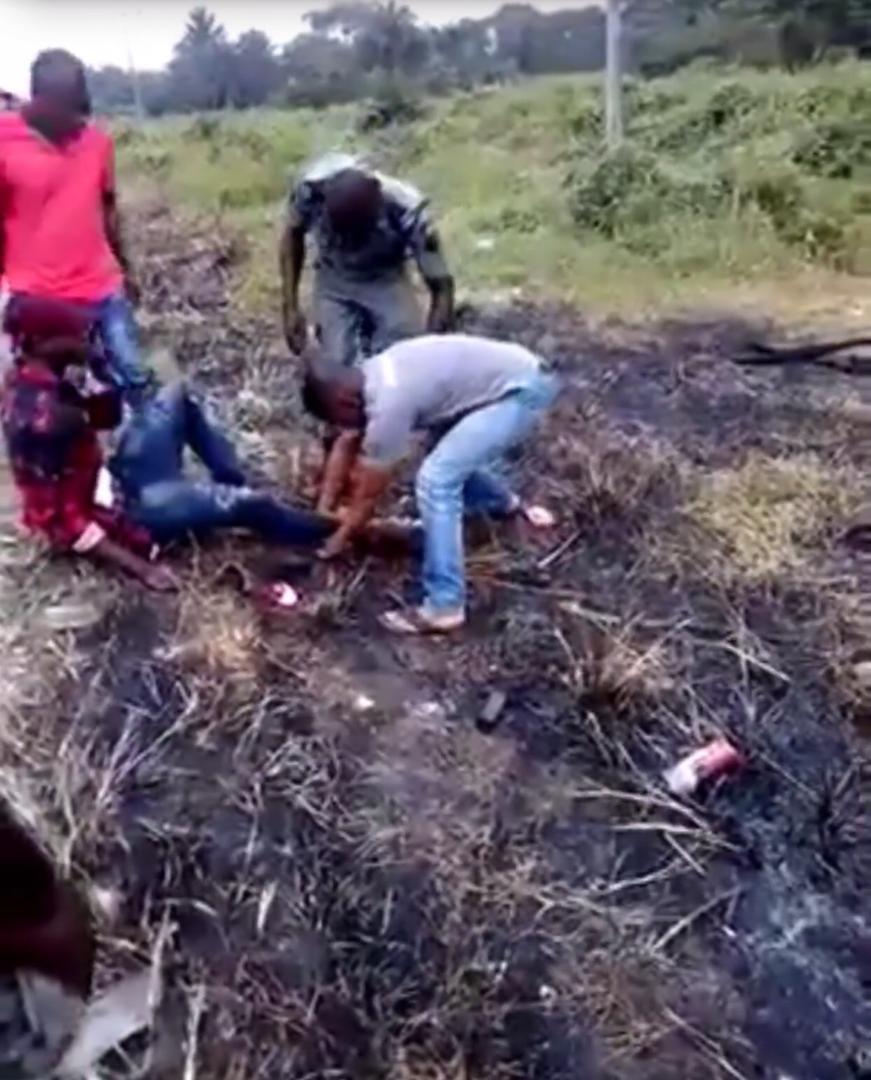 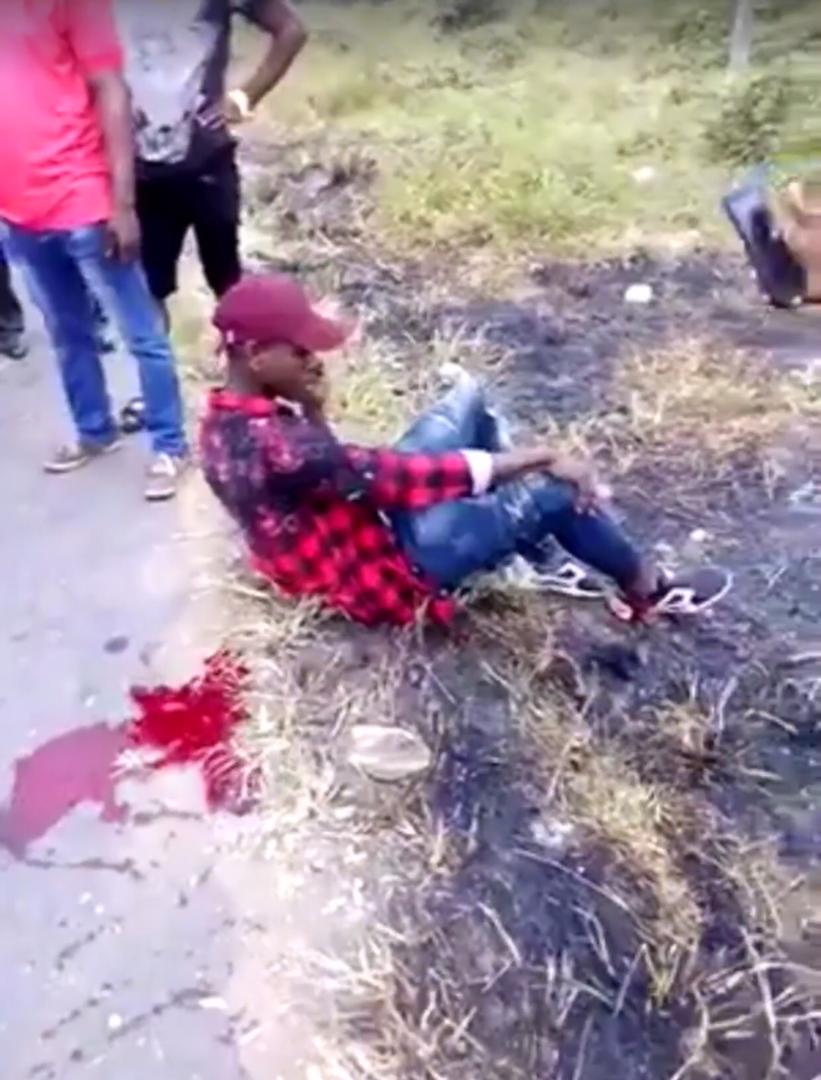 So you think if they are mentioning the security personnel or agencies in this country to guide and protect the citizens from danger and victims of crimes, you will mention the police, Nigeria don't have police, just take it like that from me, what we have are criminals on uniform fighting for their own selfish interest, deceiving us with that useless statement of theirs that the police is your friend to hell with that statement, when the chips are down the police we disappoint you, don't be surprised to know that most of this crimes of armed robbery and theft happening in our society the police and sometimes the suppliers of ammunition's, we all know this, and when they come to a scene of where a crime has been done they pick three or four innocent people and bring them to the station telling them to come and write their statements, you can just imagine fellow Nigerians are pleading with you, maybe that boy was going for an interview or an exam or a very important appointment, and that's why they are begging you and how do this passengers know that the driver doesn't have tinted glass permit, some probably might have been hearing of that the first time, since the driver had other documents and his license is intact, I feel they should have allowed him go, just collect their normal small bribe which I don't support and let them go because the journey is still far, instead of that he shot this young boy on the leg, and he might never walk with that leg again if he was going for a job interview they might never give him the job again. So in conclusion I still maintain the fact that one of the problems of this country is the police force, they are supposed to be the closest form of security to the people but sadly they aren't doing their job!!! What a pity!!! At this rate our lives is in danger!!!
**positive**

When Police Officers Are Sued
An Overview of Police Misconduct Litigation in Maryland
Lawsuits filed against law enforcement officers (collectively referred to as "police officers" in this
publication) are an established part of the legal landscape. Although police officers generally have
broad powers to carry out their duties, the United States Constitution, State Constitutions, and other laws
place limits on the actions police officers may take in enforcing the law. The videotaped beating of
motorist Rodney King in Los Angeles more than 25 years ago shockingly illustrated to the nation that
police officers can cross the line. Subsequent events have etched images of police use of force,
including fatal shootings, into the nation's consciousness. Moreover, the continuous recording of police
officers by citizens has created an atmosphere in which lawsuits against police officers have become the
rule rather than the exception. Those who claim to have been victimized by police officers have ample
recourse available under both federal and state law. One of the primary purposes of civil rights laws is to
protect citizens from abuses by government, including police misconduct. In addition to the
compensatory and punitive damages and other forms of relief available to Plaintiffs, federal civil rights
laws allow for the recovery of attorney's fees, providing a further incentive to sue.
Police misconduct litigation is vastly different from the criminal justice system with which police
officers are most familiar. In police misconduct cases, not only police officers, but their supervisors,
agencies, and local governments can be Defendants. Cases can be time-consuming and take years to
resolve. Settlements can leave officers embittered and judgments can damage careers.
This publication focuses on what happens when police misconduct lawsuits are filed. The objective is
for police officers to be able to answer the most common questions related to lawsuits: What can I be
Image courtesy of Jeffrey Sauers via commercialphoto.com